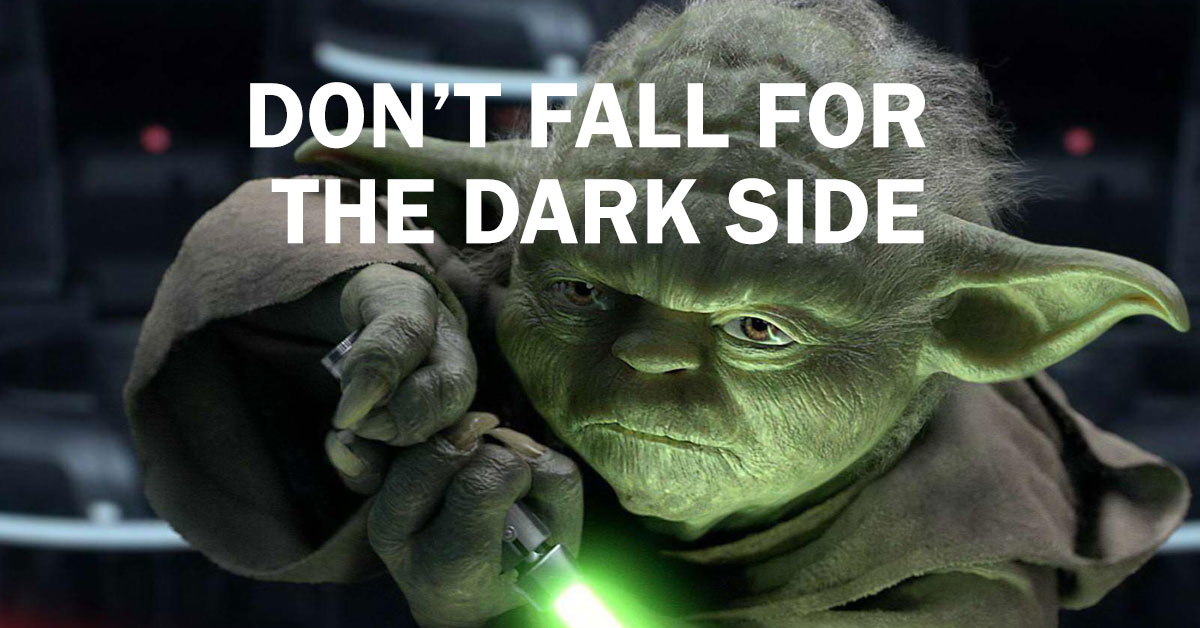 5 things Star Wars can teach you about eLearning (no spoilers)

Us older folks have been waiting for 3 decades for the first decent new Star Wars movie to hit the big screens, and with the Force Awakens, we finally have it! (yeah, there have been the prequels too. Key word: decent).

Millions have seen the movie already, and millions more will be seeing it during the rest of its screening weeks, therefore, we wont go into any spoilers. Instead, we’ll give you a Yoda-approved list of things Star Wars can teach you about eLearning (and/or life in general).

1. Don’t fall for the Dark Side

This one is kind of obvious, isn’t it?

And yet, it’s very easy to be tempted. After all, by choosing the dark side, you become part of a much more powerful organization than the Rebel Alliance. With much more powerful weapons, better spaceships and better working hours. Plus, you get to use the Force for fun immoral stuff, from making girls give you their numbers to cheating on snooker.

It’s equally easy to fall for the Dark Side with TalentLMS by omitting crappy content, cutting corners hoping that the learner’s wont take notice, feeling carelessness towards users’ experiences, stealing copyrighted material, spamming people to convince them to sign up and so on.

But as in Star Wars, just like in reality, people will rebel and demand improvement, and the good guys will eventually win. You must then ask yourself, Is the quick and dirty profit you obtain by embracing the dark side of TalentLMS worth risking your good name by associating yourself with the scammers of the internet?

That’s, of course, what Yoda says, when Luke seems to doubt that this vertically challenged elderly man is a real Jedi master.

Luke’s shortsightedness is a common mistake people make in evaluating software too, including LMS platforms. Instead of actually testing a piece of software in real conditions, and seeing how it works as a whole, potential users merely compare spec sheets and functionality matrices.

The problem with such an approach is as follows;

First of all, not all features are created equally. The fact that product A and product B both allow you to create “courses” doesn’t inform you on how productive, robust, intuitive and efficient each product is when it comes to their performance

Second, it’s not always better to have more features. Especially when you need to cut corners to fit them all. For example, a regular laptop might have both a DVD drive AND a floppy drive, whereas a Macbook or a VAIO might have neither. But what the feature matrix doesn’t show is that the former is 1kg heavier and 1cm thicker, full of mechanical parts that can malfunction, with a 3-hour battery life.

It’s the same with software. Comparison matrices only tell a skewed story, and only tell the parts that software vendors want to tell. You should evaluate software as a whole package, (instead of just as a list of features) and you should also pay attention to how it feels being put to actual use.

The features you need and how well they are implemented is more important that the presence of 100 other features you don’t need which sound appealing but in reality, won’t be used in practice. That was true for the Millennium Falcon (which, as Solo put it: “She may not not look like much, but she got it where it counts”) and its also true for TalentLMS (though, in its case, it looks good too!).

Another Yoda quote from the original trilogy.

This one can be slightly deceptive, as it’s not actually against trying new things. What Yoda wants to say is that you should fully commit to what you do (in this case, your eLearning portal), instead of half-heartedly trying this or that to see what sticks.

In other words, you won’t be able to build a great eLearning experience unless you’re really determined in building one so much that you’re not deterred by any difficulties you face early on. Nobody picked up a skill by trying to see if they were good at it — they did it by staying on the course with determination and patience, practicing as long as needed.

A lot of people start a new eLearning business with unrealistic expectations of gaining quick money and easy success, only to quit the industry and try any random thing when those aspirations don’t pan out immediately. In startup terms, the urge to “try something else” is called “pivoting”, and while it sometimes works, it’s more often than not the sign of an early quitter or a last desperate measure taken that is doomed to fail.

4. The universe is diverse. So is your audience

A lot of sci-fi has been too human eccentric, faced with stereotypical perception that everybody in a future galactic civilization will be human, white and English speaking. As for aliens, when they appear, they are more often than not, monsters (like in the movie of the same name) or violent intruders (like in countless sci-fi flicks).

Star Wars, on the contrary, paints a diverse galaxy, full of people of all kinds, colors and shapes. And while some “aliens” are clearly portrayed as the bad guys (e.g. Jabba the Hutt), others are equal and important members of the cast, from Yoda and Chewbacca down to the Rebel Alliance generals.

Plan for your learners to be a diverse bunch as well, because in most probability, they will be. There’s a huge world out there, and an equally huge market of opportunities, to cater to the needs of learners globally.

At the very least, your eLearning portal should accept payments from all over the world. After all, a web-based LMS like TalentLMS let’s you target the whole world, so why limit yourself? Then, after you’ve made sure that there’s an international interest for what you’re selling, you could take advantage of your LMS’ localization options to offer courses in different languages.

Han Solo might work, well, solo, but in the end, even he came back to help the rebel fighters in their fight against the Death Star.

And while the story places emphasis on Luke Skywalker as the chosen one, fighting the Empire is always shown as a team effort, where everyone, from Luke and Admiral Ackbar to Jar Jar Binks is equally important (though we could probably do with less Binks).

Case in point, just imagine how much better the prequels would have been if George Lucas had brought some other director (like he did for the Empire Strikes Back and the Return of The Jedi), instead of insisting them all to be completed by himself.

Delivering a great eLearning experience, whether in an enterprise or a commercial setting, is also a team effort.

If you have the right budget, you’ll get much better results by bringing other people in (graphic designers, content creators, instructors, etc.), and letting them input their best assets and contributions without micromanagement.

And that concludes our set of five pieces of eLearning advice slightly stretched and twisted to fit into a Star Wars narrative. Because (and that’s a sixth, free, Star Wars-inspired lesson for you all) if you mix up what you want to say in a nice story, people will pay more attention to it.

Now go see the new movie — and may the force be with you!