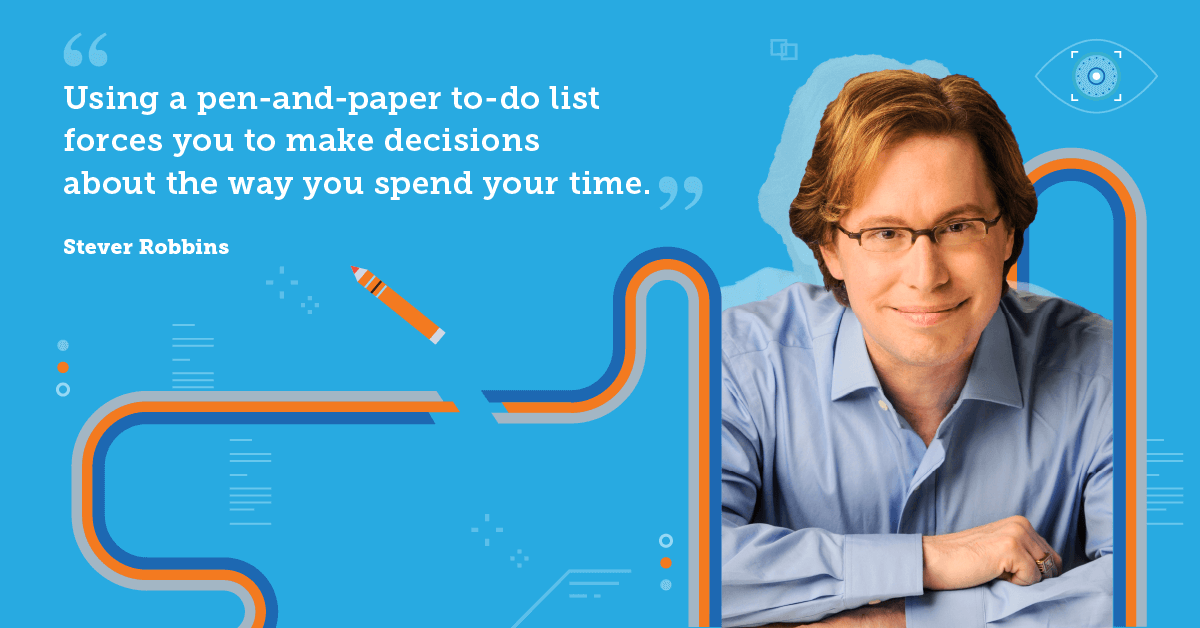 When it comes to productivity, expert Stever Robbins says keep it old school

Stever Robbins has spent over 20 years working as an advisor and consultant for leaders and entrepreneurs, teaching them how to reach their true potential both in their work and personal lives. He’s a productivity expert and the creator of Get-it-Done Groups accountability groups as well as the author of ‘Get-It-Done Guy’s 9 Steps to Work Less and Do More’. Stever sat down with TalentLMS’s Ana Casic to explain how productivity and task management play a significant role in achieving goals, and how tech tools may not be as useful as we had imagined.

Productivity in the workplace: can it be trained?

Ana: Can productivity be trained, and how would you summarize your tips for managers and HR departments on how to train their employees?

Stever: Well first of all, “can productivity be trained?” is a really interesting question because part of what you have to ask is, what is productivity in the first place?

When it comes to being productive as an individual worker, especially in a multi-person organization, there are multiple constraints that limit how much work you can do. Some of those things are under your control, some of them aren’t. So, anything that isn’t under your control, there’s really no amount of preparation you can do as a person to be able to be productive in those areas.

Stever: If your productivity is being hampered by other people stalling and being delayed, you can always just offer to help them. And no, you’re not going to get paid extra for that, and no it’s not going to be reflected in your job title, but what it will do is get stuff moving so that you can get your job done that much better. And I would keep track of that and bring it up at your review.

But basically, organizational productivity is tricky, and the only way to make it go faster and better is either at the meta level where you are a manager and you’re increasing connections between people, or, by realizing that you’re stalled waiting for someone else and actually offering to help that someone else to do things. And if they say no, then you have no choice. You can only be as productive as they are.

“Organizational productivity means that the slowest link determines the speed of the entire system.”

So, whoever it is that’s dragging their feet the most, they’re going to drag everyone else down with them.

Ana: Could you also give us some ideas on training individual productivity?

Stever: Sure. One of the ones that I talk about is using a pen and paper especially, at least for me, for to-do lists. Interestingly enough it is very, very easy and convenient to keep to-do lists on a computer. And that turns out to be a bad thing. Because when it’s too easy and too convenient, then you don’t think about the to-do list enough, and you don’t necessarily scroll down and have to look at all the to-dos that are below the fold.

When you go through your to-do list by hand, this is actually a super important moment. Because in the moment that you’re doing that, you have to decide if each incomplete item is important enough to recopy onto your new list, if you’re creating a new list, or to copy into an existing list, if you just maintain one list like I do.

And here’s the thing: if the answer is no, if you see yourself looking at an item and going, “ugh, I just don’t want to copy that, it’s so much work”, well guess what? If it’s too much work to copy to the end of your list, it’s probably too much work to do. Why is it on your list in the first place?

“Using a pen-and-paper to-do list forces you to make decisions about the way you spend your time.”

And I find that to be way more valuable than the convenience that’s offered by an electronic list. Because what happens is that convenience is so convenient, that paradoxically it enables me to ignore my to-do list, which is exactly the opposite of what I want a to-do list to do. I don’t want it to be something that I can easily ignore, I want it to be something that I have to engage with.

Now, the other thing here is that, and this for me is the ultimate productivity tip […] is you want to keep in mind why you’re doing the things you’re doing. So, if you have things on your to-do list you should ask yourself why. Why is this on my to-do list in the first place? And if you’re sitting down and working on it, you should ask yourself: is the thing this is trying to do important enough to do it?

Whether or not any given activity is worth doing depends on what it is you’re doing it for, why is it that you’re doing it in the first place, and how does that “why” stack up against the other uses of your time. A lot of times, especially if you’re self-employed, it’s super easy to get caught up in things that in the grand scheme of things are really not that important.

In your work or in the work of anyone else, if you’re training your employees to be more productive, one of the things to do, (and if you’re a manager your employees should know what their goals are and why their goals are important), and then train your employees to just check in a few times across the course of the day and say: “is the way that I’m using my time important? Am I actually doing something related to an important goal that I have, or am I just doing whatever is more interesting to me at the time, or engaging?”

And, honestly, I don’t even think that you need to say to people, “do the thing that’s the most valuable use of your time”, because they either will or they won’t. However, by calling it to mind so they realize when they’re wasting time, I’ve just found that to be very powerful. Because then they can consciously waste time if they want to. But if they don’t want to, then they don’t have to consciously waste time. They can switch to doing something that’s genuinely more important.

Ana: What are your favorite productivity tools, besides pen and paper?

Stever: Interestingly, one of them is an egg timer.

“There is a very powerful technique called timeboxing, where you give yourself limited amounts of time to work on different items.”

I’ve put these together in a combination that I call “speed-dating your tasks”. It works especially well if you’ve been procrastinating, but it works for anything. If you have three tasks you have to get done (and the ideal is three to five, no more than five), write them down on a piece of paper, take an egg timer (or something external to you) and set it to go off in five minutes. And then start working on the first task for five minutes. When the egg timer goes off, move to the second task and reset the egg timer. When it goes off the next time, etc. So, you’re cycling through in five-minute increments.

When you’ve done all the things, take a five-minute break, and this time set it for ten minutes. And just go through and work in chunks on these items. On one hand, it seems like that shouldn’t be more effective than just working on them sequentially, but I have found for me, and for many people, weirdly, you develop a kind of really intense focus momentum that can keep you going for hours doing some really concentrated work. When the timer goes off, your tendency is to go, “Wait, wait, wait! I need to get to a breaking point!” But don’t do that.

Instead, quit in the middle of what you’re doing and go to the next task, and what happens is when you get back to that task later, your brain has this feeling of incompleteness and because you didn’t finish, your brain kind of keeps it ready to just jump back into. It’s a very powerful technique, and it’s the egg timer that makes it all work.

Tech tools: the solution or the problem?

Ana: Is there something about non-tech tools that makes them appealing? Because both pen and paper and the egg timer are non-tech productivity tools.

Stever: Correct. Yes, I don’t like tech tools, and the reason that I don’t like them is because our computers allow us to do too many things. So, when you rely on a computer or a smartphone as a productivity tool, the one tiny thing you’re being productive at, it might make you very productive.

But the problem is, it also has a web browser, email, and notifications all available. So, it used to be, I would spend fifteen minutes writing a message and formatting it. Now I can write that same message and format it in a minute and a half, but then I end up getting distracted by notifications, and email, and so on, and so forth, and I spend forty-five minutes going off and doing stuff that’s completely irrelevant to what I’m trying to do[…]

Now, that said, I still spend all day in front of my computer. And the whole time I’m aware of how often I’m getting derailed, and I’m getting delayed, and my attention is getting hijacked. So, if you are going to use tech tools, if you have to do writing for example, get one of the apps, like iA writer, which is a full-screen app, and it gives me a very minimal interface when I am writing. I don’t see anything else on my screen. I can be completely immersed in the writing.

If you’re using apps, and let’s say you’re working on a particular project and you have to have three websites open, open a separate browser window and just create three tabs for those three websites so anything you look at on the screen now is just going to be related to this one task that you have and then maximize the browser window so that there’s nothing that your attention can get distracted by, except just the things that are related exactly to what you’re doing at that moment.

It’s not perfect. It’s still really easy to minimize the window again or to move to a different desktop. However, it will help you focus. And any tool that you can get that helps you focus on a laptop, or on a desktop, or on a phone is super valuable.

Ana: Is there anything else we haven’t covered yet that you’d like to mention?

Stever: You know, find ways to make things fun because if something is fun, you will get it done more than if it’s not. 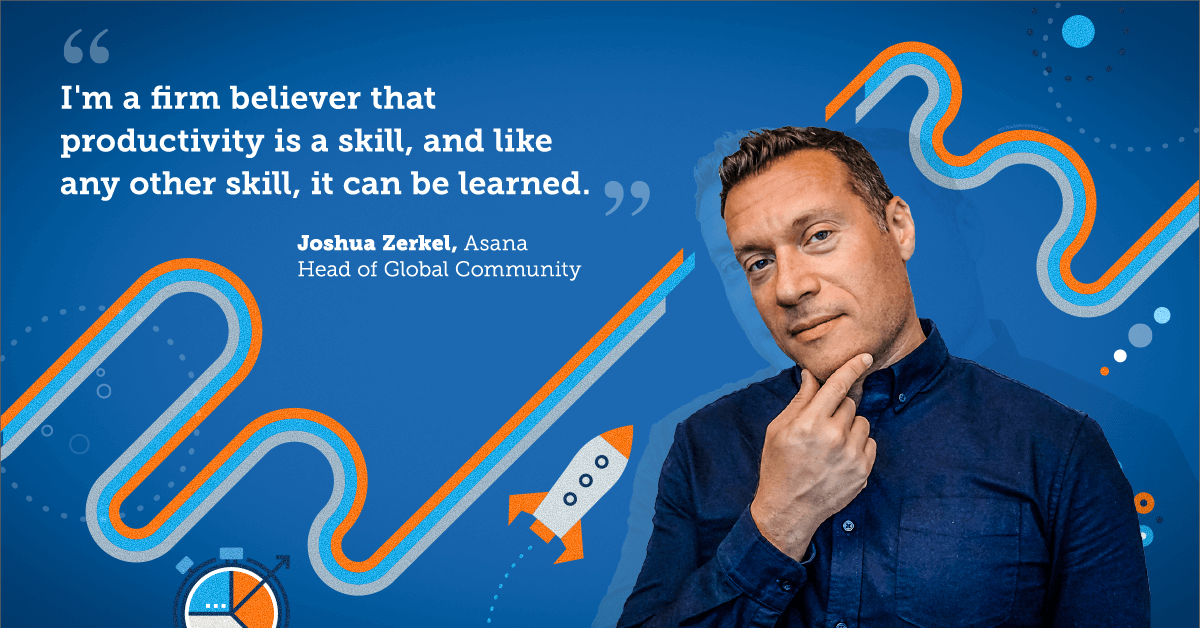 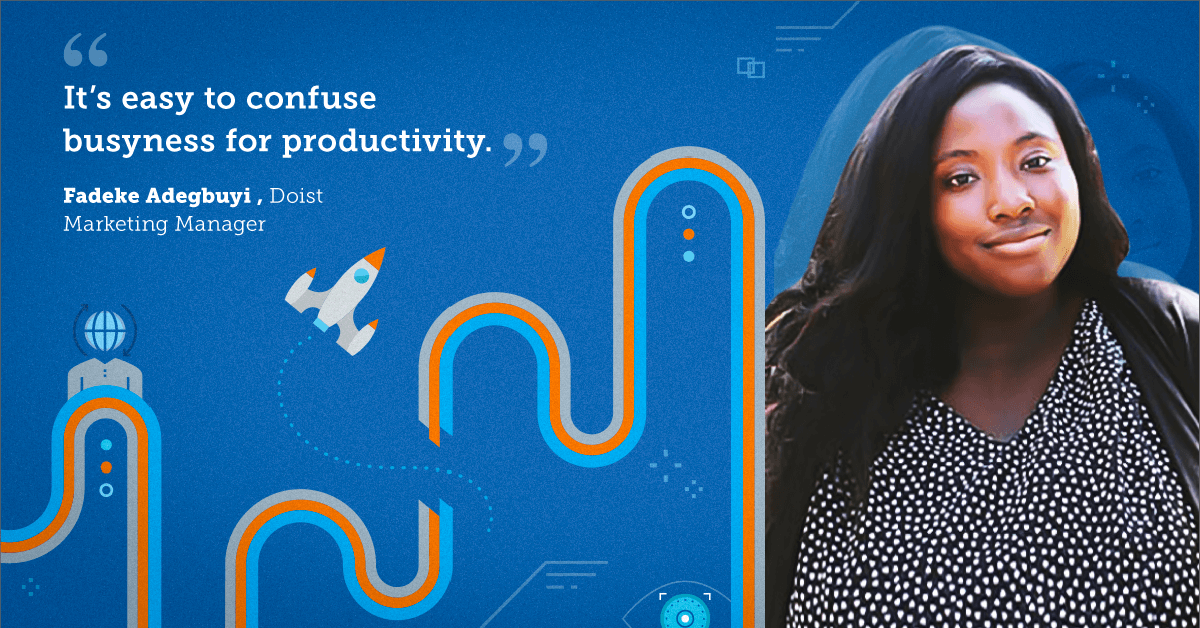 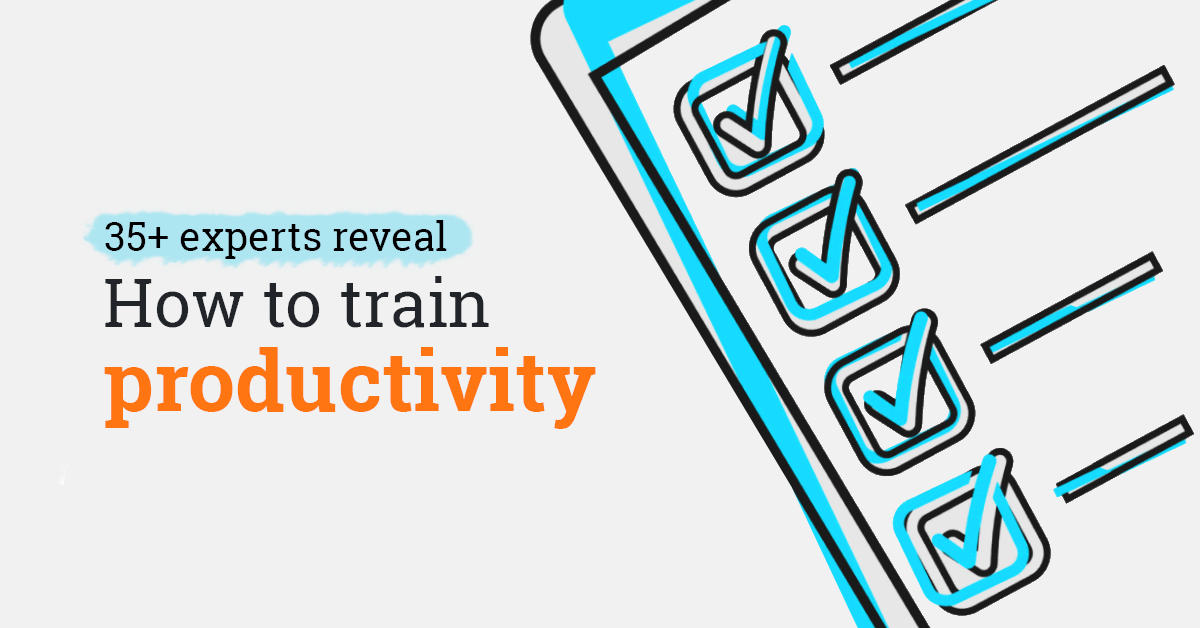