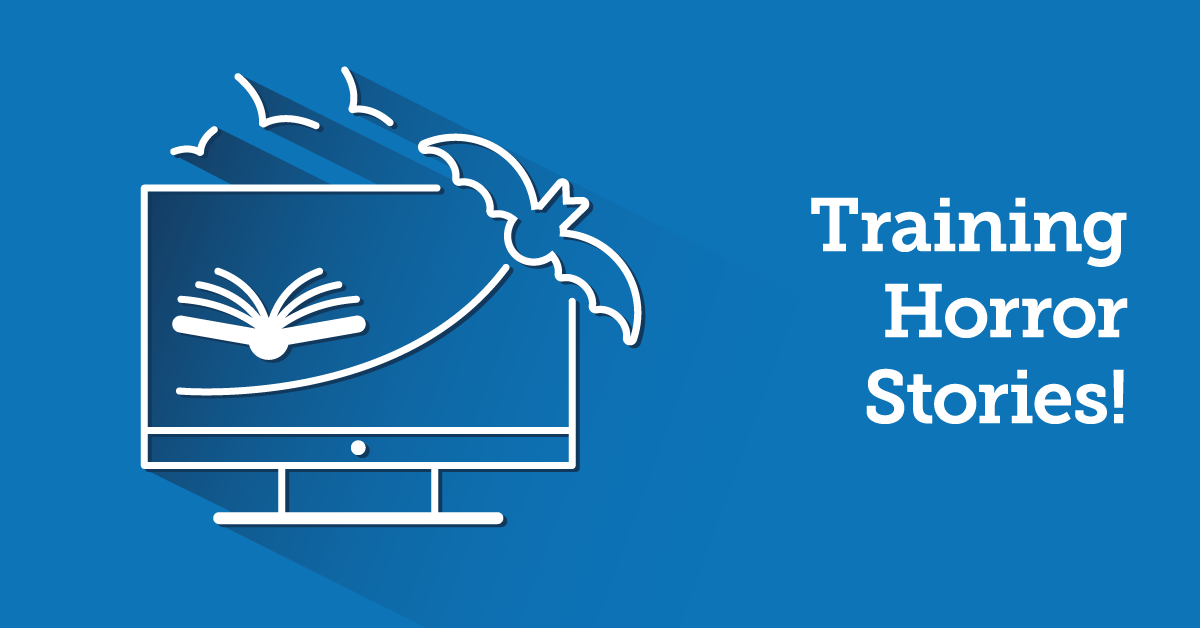 Halloween. A time for violently attacking pumpkins with sharp instruments, dressing up in fancy costumes, and going around the neighborhood for trick or treating. It’s also an excuse to celebrate all things scary, by decorating our houses with fake witches, skeletons, and monsters, visiting haunted attractions, exchanging scary stories, and watching horror films.

All in all, a tradition as American as apple pie, that has been going international as of late. In this post, we’re going to celebrate Halloween in our own way, by going to several horror movies and looking at how they relate to actual corporate training nightmare scenarios (and how eLearning and TalentLMS can save the day).

We’re going to celebrate Halloween in our own way, by going to several horror movies!

For fans of horror fiction and movies, IT refers to Stephen King’s book of the same name, featuring Pennywise the Dancing Clown (and devourer of children), and to the two (very scary) movies that have been based on it.

For training professionals though, the most common horror known as “IT” is usually the IT (Information Technology) department of their company.

It often takes a bit of persuasion for them to work on keeping an LMS running smoothly due to other responsibilities and pressures. Then, often when the final version is installed, the next one is already released

And let’s not get into the nightmare of convincing your company’s IT department to allow learners to access their training portal from outside the confines of the corporate intranet.

Thank God for Cloud-based platforms then, that allows you to open a new account and deploy your courses in a manner of minutes, without requiring an IT team to install and maintain them.

In Stanley Kubrick’s classic horror film “The Shining”, the aspiring author and recovering alcoholic Jack Torrance is slowly driven into paranoia by his inability to finish his novel and the tedium and isolation of being the caretaker of the closed for the winter Overlook Hotel in some remote part of the Colorado Rockies.

Torrance’s wife first learns that something is wrong with him when she accidentally discovers that instead of writing his novel, he had been typing hundreds of pages filled with the phrase “All work and no play made Jack a dull boy”.

Tedium can do that to a person, and while on a training scenario it won’t lead to paranoia, it can surely result in decreased training performance. The last thing you want to do is bore your learners — that will cause their knowledge retention rates and testing performance to plummet.

Fortunately (and unlike in the Shining) you won’t need any supernatural abilities to fight tedium in the online classroom: well written, straight to the point, content, with a sprinkling of interactive, multimedia, and gamification elements can work wonders in making courses more engaging.

Microlearning, with the help of a capable client like TalentLMS for iOS and Android, has also proven very effective in this regard. Serving bite-sized chunks of information to your users will have them learning so fast that they won’t even have the time to feel bored.

As far as successful horror franchises go, Friday the 13th, with its twelve movies, tv show, novels, books, and video games, is up there with the best of them.

The franchise focuses on the story of Jason Voorhees, a boy that drowned in a summer camp back in 1957, and whose death haunts the place ever since, with mysterious killings taking place ever after, especially on (you’ve guessed it) Friday the 13th.

With corporate headquarters usually located in big cities, away from haunted lakes and summer camps, training practitioners and learners are usually protected from such supernatural forces and unlucky days.

Still, rigid training schedules, such as those that come from traditional classroom-based learning, can make some dates a curse (pun intended) for everybody involved.

“Oh, damn, tomorrow it’s Friday, and they force us to attend this seminar again — as if we don’t have enough on our plates right now”.

Indeed, it can be an absolute pain to have to dedicate your precious little time on some classroom-based training session, when you should be 100% focused on your upcoming project deadline.

Online learning, with its asynchronous nature, frees learners from rigid training schedules and allows them to study at any time, at any place, and, most importantly, at their own pace.

Of course, TalentLMS does support blended learning (for the cases where in-person training makes sense), but it also supports your learners’ right to study at their own discretion. If they’d rather skip their studying when there’s a looming business deadline, they don’t have to. If they want to spend the weekend learning all about their curriculum from home, they can absolutely do that too.

A perennial fan favorite for three decades and counting, Alien was and remains the best horror and sci-fi combo film.

And while being chased by scary looking, acid-leaking alien killer in the narrow confines of a spaceship (where “nobody can hear you scream”, as the movie’s motto said) is frightening enough, the real horror in the movie is how badly everyone (except Ripley) screwed up — failing to follow proper procedures, ignoring quarantine regulations, playing fast and loose with security and so on.

Security can be a nightmare on the web too, with viruses, hacks, denial-of-service attacks, privilege escalation bugs, and other such scares running around rampant — just like that Alien inside Nostromo.

This is why proper protections, regular maintenance and updates of your software, and tight authentication and authorization protocols are necessary.

Thankfully, TalentLMS comes with support for all major Single Sign-On options, a comprehensive security policy, and a dedicated Cloud dev-ops team that handles security updates for you.

What’s more, since your eLearning portal lives on the Cloud, it can never compromise anything running in your data center, giving your IT team the ultimate in peace of mind.

A little less scary and wackier than the other films we’ve covered, Scary Movie is a comedy franchise that pokes fun at horror movies.

In Scary Movie the plot doesn’t matter: its plot is merely a collection of horror movie cliches. The only thing that’s actually scary in the Scary movie is how trite some of the plotlines and script gimmicks horror directors use are.

Then again, isn’t the same also the case in a bad eLearning course?

You know what we’re talking about. Horrible PowerPoint presentations with 200 bullet points crammed on each slide, crappy stock photos, and clip art, banal “motivational” quotes, oft-repeated “jokes” that weren’t funny the first time around, the list goes on. Some learners would rather face Freddy Krueger than suffer through such a course.

Bad content, of course, is not something that an LMS can solve by itself. Content writers need to work on their content, try to discover what works well and what doesn’t (e.g. by asking learners for feedback through surveys, and monitoring their performance with reports), and generally by striving to be engaging and creative.

That said, TalentLMS does come with hundreds of professionally-made courses in its Marketplace, which is a perfect place to start looking for quality training content to deploy and to be inspired from.

So, here you have it. Five of our favorite movies to watch (or rather, re-watch) on a Halloween night — and five nightmarish eLearning scenarios you should strive to avoid. Only, unlike in the movies, the right attitude, the right content, and the right LMS, will get you out alive from the latter every time.

Now, if you’ll excuse us, we have some pumpkin carving to do.